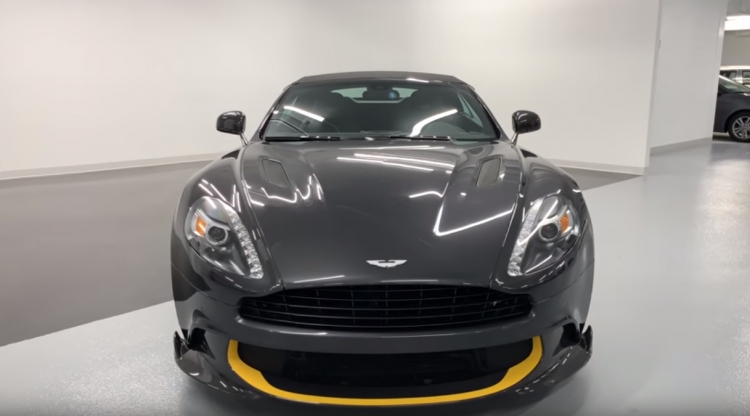 The first and most difficult part of creating a site dedicated to the ultra luxury market is how to define an ultra luxury car. We’ve chosen to keep our definitions loose, including not only the requisite Ferrari but also some cars that aren’t necessarily sports cars such as Bentley Continental GT.

The Aston Martin Vanquish S is somewhat difficult to place because it includes characteristics descriptive of both sports cars and touring cars. Although probably more under the sports car category, the Vanquish S lacks none of the refinement of a touring car with its Alcantara and full grain leather interior. Under the hood, this car is all muscle. Its V12 pumps out 520hp at 7,000rpm, the most horsepower of any Aston Martin to date. Also, it changes gears, via paddle shifters on the steering column, in the blink of an eye, 250 milliseconds. Despite the Vanquish S’s brawn, it still has finer touches like the leather and certainly fits the image of either a sports car or a touring car.

To put it in Bentley’s own words, the Bentley Brooklands is “the world’s most exclusive coupé” because there will only be 550 built! The name for the Brooklands comes from a racetrack in England that the “Bentley Boys” (a group of racers in the 1920s who drove Bentleys) would race on. One look at the Brooklands tells you that this is a powerful yet luxurious car. The power comes from Bentley’s strongest V8 ever, and the luxury comes from the industry’s finest wood and leather. One continuous piece of this leather makes up the entire roof! Another factor that makes the Brooklands stand apart is the fact that it has more leg and head room than any other luxury coupe. The four occupants will be housed in perfect comfort and serenity. The only downside to the Bentley Brooklands is that it is not scheduled to be delivered until early 2008, but it certain to be one of the most coveted Bentleys ever because of its small numbers and luxurious styling.

Imagine stepping into a car where every detail, no matter how small, is given a vast amount of care and attention; where everything must be perfect or a replacement part is used. Such is the Bentley Continental GT. This car and its convertible twin the GTC make up two of the most successful vehicles to emerge from Bentley. This company was founded by Walter Owen Bentley in 1919. During World War I, he built airplane engines. In 1998, Volkswagen bought Bentley. The Continental GT was first produced in 2003 and the convertible version, the GTC, in 2005 and 2006.

As if the Bentley Continental GT was not good enough by itself, Bentley has announced that it will be making the Continental GT Speed. This Bentley will be a record-breaker for the company: it is the most powerful Bentley to date, and it is the first to hit the 200 mp/h mark. The GT Speed has the same twin-turbocharged W-12, but the horsepower is upped to 600. The only downside to the GT Speed is that it is currently only scheduled to be produced for the 2008 model year, although it can be ordered in August 2007.

Jaguar is well known for their luxury cars, but what about their ultra luxury cars? The Jaguar XK and the more powerful XKR are Jaguar’s launch into the ultra luxury market. Both the XK and the XKR come either as a coupe or convertible. The XK was originally produced in 1997 and has been revised for the 2007 year. The largest difference between the XK and the XKR is the engine. While the XK has 300 horsepower, the XKR has 420 horsepower from the same V8 as the XK but with the addition of a supercharger. Both vehicles are computer limited to 155 mp/h (250 km/h), but they may be capable of more than that. To aid in safety, the new XK is equipped with a sensor that will raise the hood of the car, slightly, if a pedestrian is struck, decreasing potential harm to the person. With the XK and the XKR, Jaguar has undoubtedly secured itself a place among the great ultra luxury car makers.

All specs. and prices are based on the coupe version of both cars.

The Maybach 57S and the 62S are essentially the same car except for their lengths of 57 decimeters and 62 decimeters respectively. The S stands for “special”. This ultra luxury car is all about the luxury and a lot of it too. Imagine getting a massage in the reclining back seat of the 62S while watching your favorite movie on the seat in front of you! Oh, and did we mention the fold-out work surfaces that can be used as a table or desk? This is a true ultra luxury car, but the luxury does not at all compromise the power this car possesses. Its V-12 produces 604 horsepower and speeds it to 100 km/h in only 4.8 sec. (62S). The Maybach 57S and the 62S are two fabulous ultra luxury cars that are perfect for those who demand the highest form of luxury and refinement.

Mercedes-Benz stands apart from almost all the rest of the luxury car industry in that it has every kind of luxury imaginable: from entry-level luxury all the way up to ultra luxury and from sports cars to touring cars, Mercedes-Benz has it all. The ultra luxury Mercedes-Benz model is the S600. The most recent S600 was unveiled at the 2005 Detroit Auto Show, but it has been somewhat redesigned for the 2007 year. Although the S600 has the luxury essentials such as high grade wood and leather, it lacks no power, because of its twin-turbo V12. In add to the visible touches like the wood, the S600 has side bolsters which can inflate to keep the driver in the same position. Also, the dashboard has a slot to accept memory cards to play music. If the buyer lacks one of these cards, have no fear because one of the S600′s options is iPod integration. To help keep all of this luxury safer, the S600′s rear lights flash when the driver needs to brake in an emergency. The sunroof and windows will also close if the car senses possible rollover conditions. All this married to the extremely powerful V12 engine definitely makes the Mercedes-Benz S600 one of the most exquisite ultra luxury cars yet.

The styling of the Morgan Aero 8 is that of luxury and refinement, but don’t let its attractiveness fool you. This is one amazing ultra luxury car, both inside and out. The Aero 8 excels in uncompromising power coupled with stunning beauty. Under the hood, this car has a powerful BMW V8 that produces 325 horsepower! This engine propels the Aero 8 to 100 km/h (62 mp/h) in less than 3.5 sec.; in addition, its marvelous braking ability allows for safe usage of this power. Recently updated for 2006, the Aero 8 was the top selling car from Morgan that year. The Aero 8 has a great heritage to uphold as it is derived from a proven line of Morgan racing cars, and it is sure to remain one of Morgan’s best-selling cars because of its luxurious styling joined with a potent engine.

What compilation of ultra luxury cars would be complete without the Rolls-Royce Phantom? For over 80 years, that name has meant the ultimate in luxury and refinement. The first Phantoms were made in 1925, but the most recent version was introduced in 2003. There have also been two special editions of the Phantom: the “Phantom Black” and the “Phantom Silver”. The Phantom Black is an exclusive tribute to the Phantom’s power. The primary color used is obviously black. There will only be 25 produced for now. The second special edition of the Phantom is the Phantom Silver which was made to honor the 100th anniversary of the Rolls-Royce Silver Ghost. Some of the changes from a standard Phantom include Ghost Silver exterior paint, a solid silver Spirit of Ecstasy (the Phantom’s hood ornament), and two solid silver key fobs. To protect the Spirit of Ecstasy from being stolen, a button inside the car allows it to be retracted. There will also be 25 of these Phantom Silver models made. The main feature of the Rolls-Royce Phantom is its luxurious interior. The rear passengers are treated to a 12 inch screen and a 6 disk DVD changer. The sound system of the Phantom is one-of-a-kind: it has 13 regular speakers and 2 bass speakers, all of which envelop the listener in music. The silky leather and elegant wood all contribute to the overall ambiance of dignified luxury in the Phantom. With a powerful V12 behind it, the Rolls-Royce Phantom certainly has the strength to support its style; and it is sure to always be one of the leaders of the ultra luxury industry.